French officers in search of a king

In this institution is found the documentation created by the Secretaría de Estado y del Despacho de Marina, as well as by the Ministerio de Marina (Ministry of the Navy) regarding the military personnel that took part in the Spanish Navy between 1784 and 1939. Specifically, 1,302 files of personal records of the members of the General Corps are guarded.

But, why are these documents about French officers here? How did they get to enlist in the Spanish warships at the end of the XVIII? In 1789, the French Revolution broke out, which meant the advent of contemporary society, the rise of the bourgeoisie to power, and its economic corollary, capitalism. According to Alexis de Tocqueville, his goal was to abolish the institutions of the Middle Ages everywhere. But the revolutionary events, the trial to Louis XVI and his passage through the guillotine, shocked not only a good part of the Europeans, but also the royalist French supporters of the structures of the Ancien Régime.

On the other side of the Atlantic Ocean, the squadron destined for the Barlovento Islands under the command of the Marquis de La Rivière, composed of the ship of the line Ferme, the frigate Calypso, the corvette Maréchal de Castries and the schooner L’Elisabeth, had anchored in La Martinique, just as the revolutionaries took control of the island.

They contacted the governor of the province of Trinidad, José María Chacón, because they wanted to serve King Carlos IV of Spain, the closest relative of his legitimate sovereign. The reasons given by the crews to request asylum could be summarized in the expression used by the Marquis de Bouret, in his letter addressed to the King of Spain, when referring to the events that were happening in France: la plus monstruese des revolutions (the most monstrous revolution).

Shortly after Brigadier Riviere was informed of His Majesty’s willingness to welcome the offer of his services, which for this officer represented a great consolation to the misfortunes experienced for so long. As he said, at last, he could deliver to the House of Bourbon the forces entrusted to him, the only ones that have remained intact and faithful to our unfortunate monarch.

Lieutenant General Gabriel de Aristizábal was in charge of transmitting to the commander of the squadron the real will: the officers who wanted to remain in the service of Spain, would be incorporated into the Royal Corps of the Spanish Navy with the same degree they had in France, but they had to lend first the oath of fidelity, in front of a priest, to his Catholic majesty.

However, a short time later, the policy for reception of the French officers changed radically. Despite the commitment acquired to receive and attend each French officer according to his merit, the Spanish monarch yielded to the pressures of the new French government that demanded the separation of service from all the emigrants from sea and land.

All of them were urged to leave Spanish territory by Royal Decree of March 23, 1798. Although they were given a passport to leave the country, some remained in their destinations, although their names were deleted from the Estado General de la Armada. The justification: to conserve the friendship, alliance and good harmony that fortunately subsisted in that moment between Spain and France without the least alteration.

To know more, we recommend consulting:: 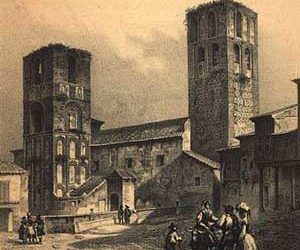 The Christian faithful leave their mark on parish documents

One of the most important sources for genealogical studies are the sacramental certificates of baptism, marriage and death.Since when do these documents exist? We have to go back to the 16th century, to 1545. That year began the celebration of the Council of Trent, in...